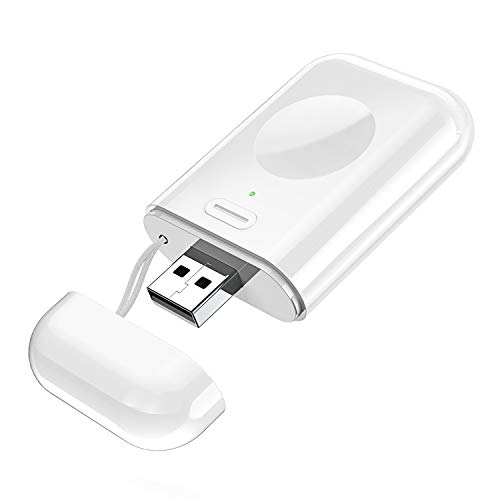 Portable Wireless Charger with USB - The Best Choice for Travel and Outdoor
The STOON wireless charger for apple watch features a magnetic charging module. Simply place the watch in the wireless charging area, tap the power switch to charge it, or even charge it in your hand.

USB Charging Port
With a USB charging port, when the charger is out of power, just plug it into your laptop/charging bank or any other USB charging device to charge the charger at any time!No need to carry two charging cables and a large charging socket.

- 【Cable-free Wireless Charger】: This wireless charger for iwatch does not require an extra cable, eliminating the hassle of cable winding! With the magnetic charging module, you can charge your watch anytime, anywhere, instead of a long-charging cable or an oversized base when outdoors or traveling.
- 【Portable and 1000mAh Battery 】: This portable charger for apple watch is only half the size of a credit card and can be easily placed in your pocket and in various bags. Built-in 1000mAh Li-Ion battery gives the Series 1/2/3/4/5 Apple Watch extra battery life.
- 【5-in-1 Universal Compatibility】: Compatible with all 44mm 42mm 40mm 38mm Apple Watch Series 5/4/3/2/1. Just buy one of our wireless chargers and you can share it with family and friends.
- 【One-piece USB Charging】: The magnetic charger comes with a USB, just plug it into your computer/mobile power or any other USB charging device to charge the charger at any time! (watch and charger can be charged at the same time)
- 【Multiple Protection】: Built-in overcurrent, overvoltage, short circuit and overtemperature protection provide a safe environment for watches and chargers (heating during charging is normal, built-in overheat protection, please feel free to use). As a responsible seller, STOON service team provides worry-free 12-month.